4 Lessons Marketers Can Learn From That Creepy Peloton Ad 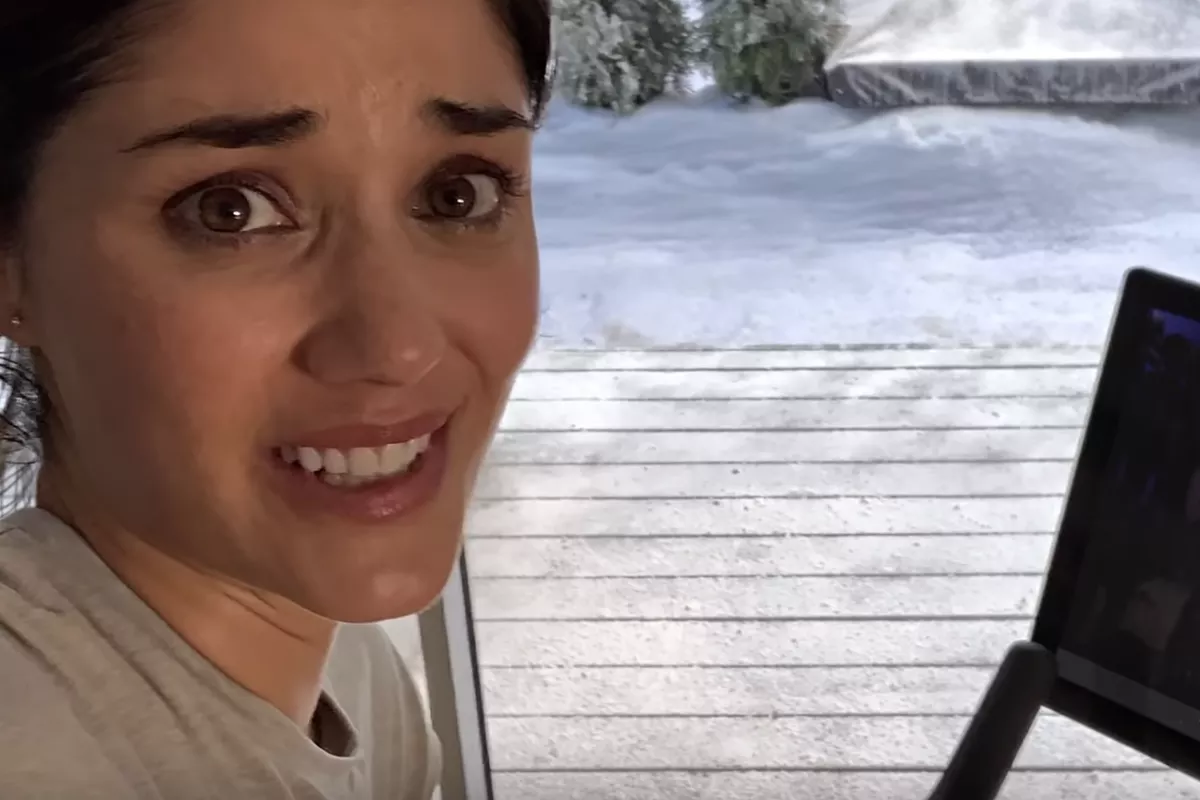 Will anyone be able to look at a $2,000 Peloton bicycle again with a straight face or, inspired by the actress featured in Peloton’s widely-maligned TV spot, a terrified face?

Since unleashing the unintentionally hilarious Christmas TV spot, “The Gift That Gives Back,” Peloton has endured consumers on social media hammering their ad depicting a husband gifting his wife a Peloton, which inspires her to joylessly work out to, seemingly, please her male partner. With the ad criticized as “tone deaf,”  “sexist” and “a dystopian hellscape,” consumers noted that the model-slim “ Peloton Wife” exercised as if her life (or marriage) depended upon her losing the few pounds she still retained.

Sentiment on thousands of tweets ranged from “nothing says ‘maybe you should lose a few pounds’ like gifting your already rail thin life partner a Peloton” to “So sweet. My husband was inspired by the Peloton ad to get me a pair of pants in a child’s medium and a handwritten note that says: ‘Don’t fu—king touch me till you can fit into these'” and finally, “I’m excited to announce I’m… joining the presidential race and running on the single issue platform to jail everyone involved in the pitching, scripting, acting, shooting and approval of the Peloton ad.” 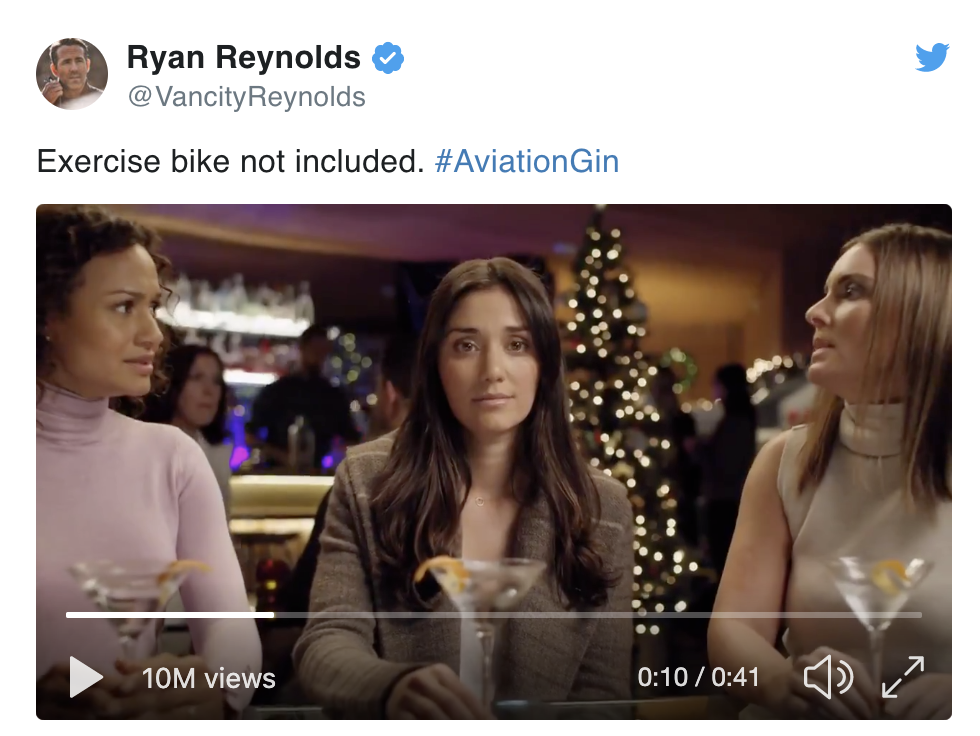 The good news (if there was any) for Peloton’s ad agency, Mekanism, was that their ad generated more than 878.3k views and was watched more than 7 million times on YouTube. What’s more, the Peloton spot was covered by media from People magazine to CNN-TV; and mocked on “Saturday Night Live” and in a knowingly-meta ad for actor Ryan Reynolds’ Aviation American Gin, which offered Peloton actress Monica Ruiz the chance to parody her own spot. If you believe that any publicity is good publicity, the cringe-worthy Peloton ad was a PR smash. But… we at Maccabee don’t believe that brand-immolating publicity is ever good.

So what lessons can marketers and corporate communicators learn from Peloton’s campaign? Here are four:

Responding to the avalanche of mockery for their TV spot, Peloton’s PR staff released a statement criticizing consumers for disliking their ad – “we’re disappointed in how some have misinterpreted this commercial…”

Read our lips – it’s not your customer’s fault that your campaign evoked Rod Serling’s “Twilight Zone” or reinforced the idea that a woman’s path to a man’s heart is by obtaining his approval through exercise and weight loss. Never, and I mean, never attack your own customer base for “misinterpreting” your campaign.

Remember the days when a marketer such as Apple would run a TV spot like the Chiat/Day agency’s immortal “1984” and the only people in control of the ad’s trajectory was Apple and Chiat/Day? Now, your ad or PR campaign is just a content asset, the raw material that’s ripe for consumers to edit, satirize and transform into memes. 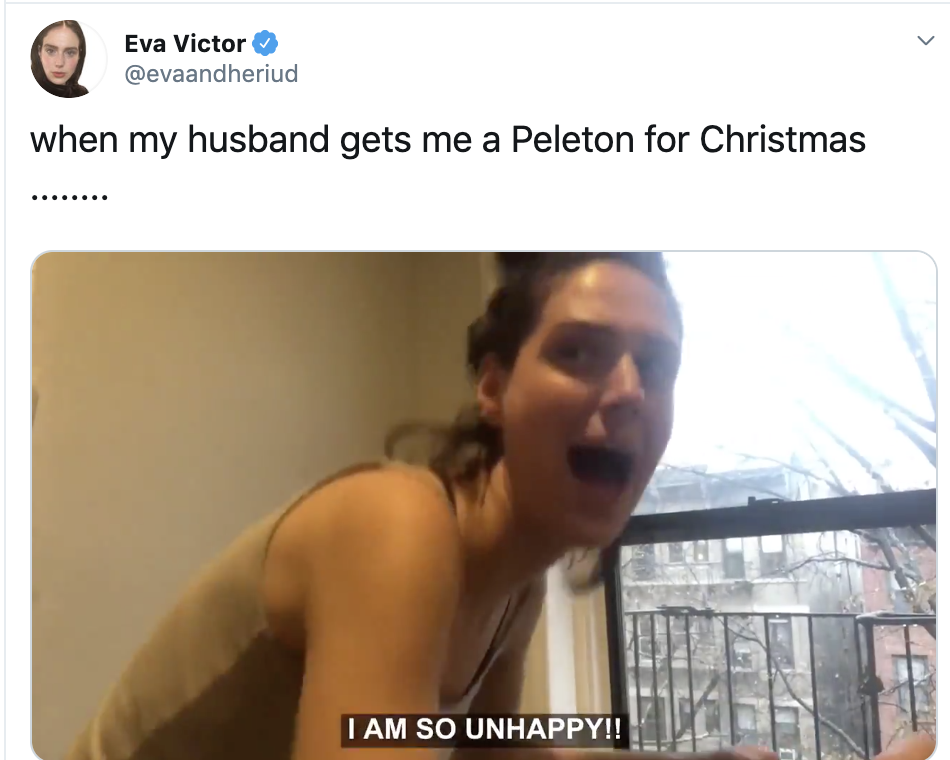 Among the most entertaining responses that Peloton’s ad inspired  – a “Black Mirror-esque” parody and comedienne Eva Victor’s hilarious “When My Husband Gets Me a Peloton For Christmas” video which, itself, has generated 33,869 retweets and 4.16 million views on Twitter. Just like parents must imagine the future ramifications of naming their child “Moonbeam,” marketers must recognize that their campaign assets will now be transformed, commented upon and manipulated by consumers in ways that no one could expect.

Hundreds of Facebook and Twitter posts and YouTube videos have addressed the Peloton ad; in fact, perhaps the only place online that’s scrubbed of Peloton-mania is Peloton’s own social channels. Since posting their ad on Twitter on Nov. 12, the company has gone Twitter-silent about the conflagration  – leaving the Twitterverse to ridicule the brand without Peloton’s involvement.

Similarly, the New York Times marveled that during a 40-minute appearance at a New York financial conference, Peloton CEO John Foley didn’t mention the ad controversy once and “refused to answer reporters’ questions about the ad.” The ad agency responsible for the imploding spot, Mekanism, refused (wisely) to respond to media inquiries.

What can marketers learn from Peloton’s near-silence about its own marketing melt-down?  “Peloton’s fatal flaw is that they didn’t pull the ad right away and apologize,” opined digital marketing expert Mark Schaefer. “Even if some people are defending the ad, the company is getting crushed in the marketplace. By failing to react, Peloton is turning a promising brand to mush. The company is becoming a parody.” To be honest, I don’t think Peloton’s only option was an apology; it would have been fascinating if Peloton had seized the initiative to expand the TV spot with a background video providing tongue-in-cheek context – perhaps a behind-the-scenes interview with the actors providing the back-story about a Peloton wife who really did want to receive that fitness bike, revealing what happened before and after the TV spot.

But Peloton’s ostrich-head-in-the-sand refusal to engage in any way with the furor they sparked allowed its critics to dominate the conversation without input from Peloton. The Peloton brand, essentially, was left to fend for itself as the social media sharks circled.

In today’s age of female empowerment and other cultural movements, every ad and PR initiative will inevitably be placed under a microscope – and Peloton’s ad was ripe to become a gender politics piñata. In fact, a psychologist interviewed by AdAge called Peloton’s spot a “male fantasy ad” that implies that men can be “gifting heroes” and get “skinnier spouses.” In other words,  receiving a piece of workout equipment from your partner will “change your life” as opposed to being a grossly insensitive suggestion that you’re overweight. Is your campaign ready for that kind of dissection by a psychologist?

Perhaps the strangest realization of the Peloton crisis may be: women were deeply offended by Peloton, while men may well respond precisely as the company hoped they would – by gifting a Peloton for their wives and partners. Good luck with that gallant gesture now, gentlemen.

The final words should be this reaction tweeted out by one USA Today columnist: “it’s clear this woman doesn’t need a Peloton. She needs a good therapist and a divorce lawyer.” It would surprise no one if Peloton might be eyeing its current ad agency and considering a different type of divorce. 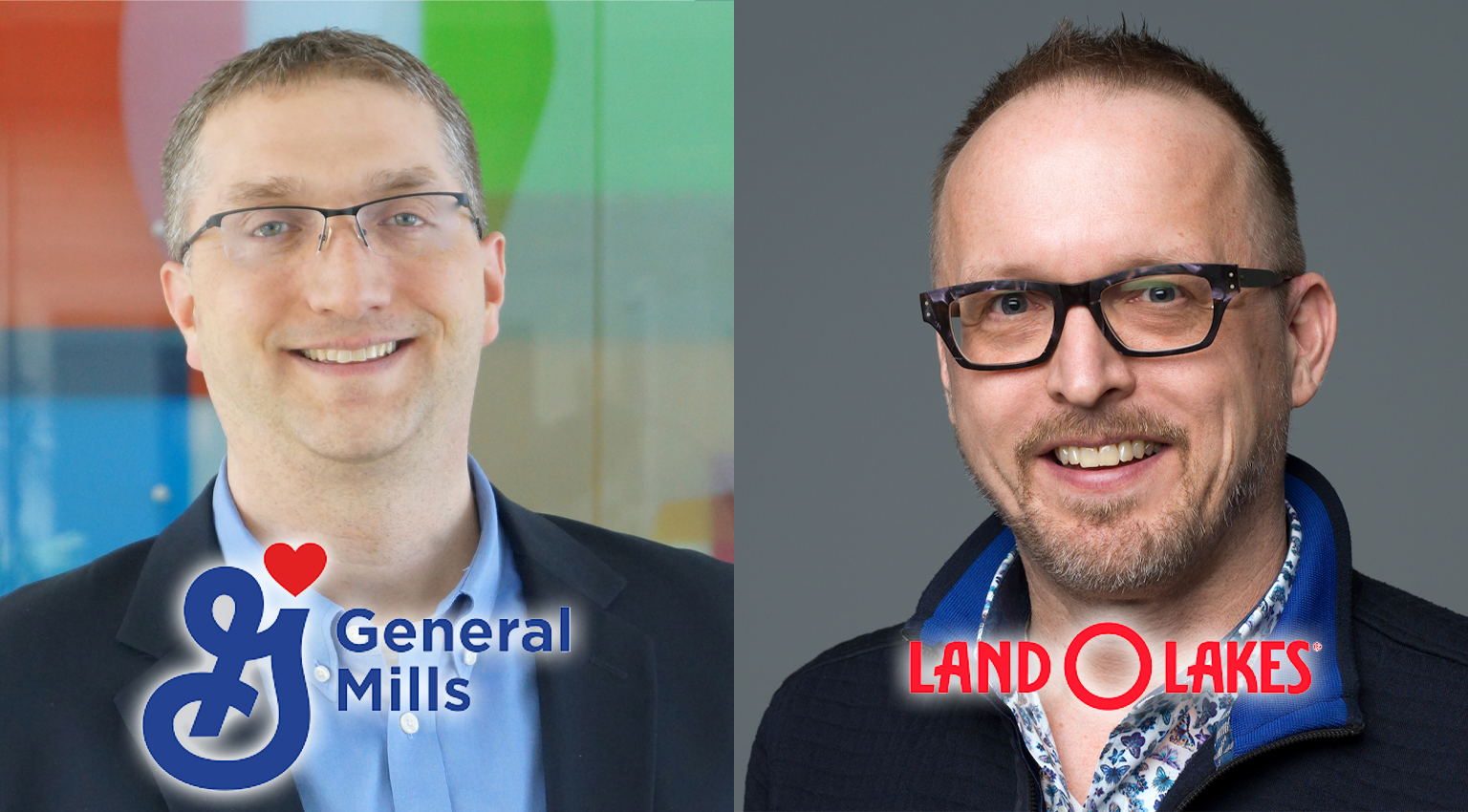 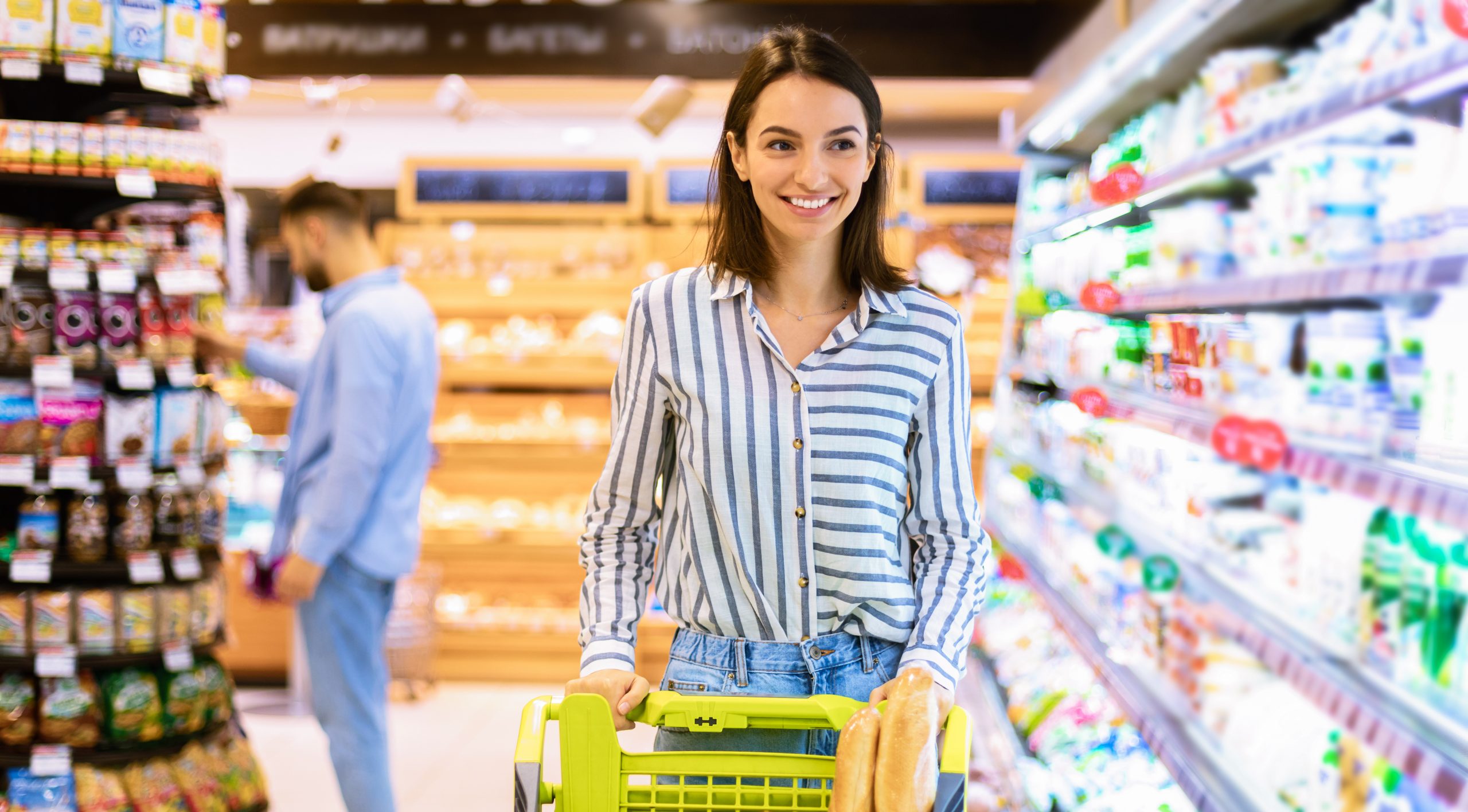